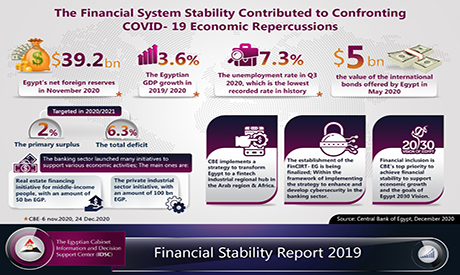 The Center for Information and Decision Support (IDSC) released an infographic titled “Financial System Stability Has Helped Address Economic Impacts of COVID-19,” which included a presentation of the most important points of the Financial Stability Report 2019, published by the Central Bank of Egypt (CBE).

The report says that the stability of the financial system and improved economic performance have helped the Egyptian economy withstand the fallout from the COVID-19 pandemic.

The CBE has taken several proactive measures, including a cut in policy rates by four percent (400 basis points) and the launch of several initiatives aimed at maintaining domestic production, keeping unemployment rates low and safeguarding the gains of the economy. economic reform program.

Egypt offered international bonds worth $ 5 billion in May 2020.

The CBE’s financial stability report, released in December, found that Egypt is aiming for an initial surplus to GDP ratio of 2% in fiscal year 2020/2021 and reaching a total budget deficit of 6.3%.

The CBE said the government offered international bonds worth $ 5 million in May 2020 despite falling investment in emerging markets in the first quarter of the year.

He also said that the Fiscal Stability Index saw a noticeable improvement in 2019, before declining in early 2020 due to COVID-19.

Regarding the initiatives that the CBE launched in 2020 to support the private sector of construction, agriculture and industry, the report found that the total allocation reached EGP 68.8 billion at the end of June. 2020.

In addition, the total loan and facility portfolio under the Micro, Small and Medium Enterprises (MSME) Support Initiative recorded EGP 201.8 billion from the end of December 2015 to the end of June 2020. .

The report also showed that the banking sector represented 89.6% of the financial system at the end of the 2018/2019 fiscal year, which benefited from good fiscal security indices until June 2020 despite the challenges imposed by the pandemic of COVID-19.

In this regard, the report found that the total assets of the banking sector reached EGP 5,300 billion in fiscal year 2018/2019 (growth rate of 5.8% compared to the previous fiscal year) , which continued to grow to reach EGP 6.4 trillion in June 2020.

Egypt’s net foreign assets reached EGP 77.2 billion in December 2019, driven by increased foreign capital inflows in 2019 which contributed to the significant increase in net international reserves (RNI ) observed in December 2019 at $ 45.5 billion, according to the report.

Regarding the non-banking sector, the report states that the sector’s total assets reached EGP 615 billion in fiscal year 2018/2019, or 10.4% of the country’s total budget system assets.

2021-01-06
Previous Post: OECD: OECD warns of return to pre-crisis economy for Spain before 2023 | Economy and business
Next Post: Crisis training, emphasis on the use of the Taser among the recommendations of the working group